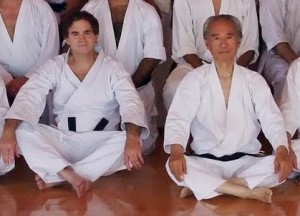 Kent Chapman pictured with Mr Ohshima at the end of sandan practice at the Shotokan Ohshima Dojo in 2009.

Kent Chapman began practicing karate in 1971 at the BYU dojo and obtained his black belt in 1983, later progressing to the rank of sandan. He established the Salt Lake dojo in 1978 and in addition to teaching there, he as taught karate through Community Education to both children and adults classes and worked with law enforcement agencies to teach classes in personal safety and women’s self defense.

Kent has also practiced a number of other martial arts including aikido, judo, jujitsu, iaido and tai chi. He enjoys studying oriental culture and philosophy, and the history of the martial arts.

Kent graduated from the University of Utah, School of Medicine as a physician assistant in 1985 and now works in emergency medicine.

Alun Thomas at the end of Canada West summer 2010 special training in Vancouver.

Martin Schwarz making kata heian godan when he was a brown belt.